BLOGS Testing in the CD pipeline - the deficient adhesive that fractures the CI/CD architecture
Copied!

Our thoughts on the testing framework, emerging trends and opportunities in the space

Software development methodologies have evolved over the decades in a direction allowing quicker development and deployment with ever-increasing application complexity. The age-old waterfall systems were replaced with agile methodologies which involved breaking down an application into smaller modules and developing each of them in parallel iteratively. Once built, the modules were integrated together and deployed as a single application either at edge or on the cloud. However, as the functionality of applications increased with large temporal variations in the incoming traffic across the different app sections, the deployment methodology also shifted to modules – and the concept of microservices exploded.

A single monolithic application is broken down into hundreds of microservices, with each one following its own development, testing, deployment, and monitoring cycles. The entire application is brought together by an underlying CI/CD (Continuous Integration/Continuous Deployment) pipeline infrastructure. The DevOps methodology is envisioned to automate all the steps following a code commit right up to deployment. As soon as a developer commits the code, the pipeline should automatically build, perform integration tests, staging tests, provision and configure infrastructure, and finally deploy the service making it live for the customers. At Pravega, we have been closely following developments in the microservices/containerization area and its implications on CI/CD. We will share our observations in a series of notes, starting with this first one on Testing in the CD pipeline.

The end goal is clear – to achieve complete autonomy across the CI/CD pipeline. However, after speaking to 20+ companies in various stages across Series-A to pre-IPO, we have observed that CD is rarely utilized to its potential. There seems to be manual interventions post the integration tests to verify end-to-end functionality, performance and conduct extensive staging tests – all in all to build enough confidence on the code to deploy in the real-world scenario. Coupled with the number of steps including provisioning of the staging infrastructure, configuring the testing environment (dependencies, databases, etc.), creation and maintenance of test cases (front-end, API, end-to-end, performance, security), running the tests, analysis and management of test outcomes, the end goal seems like a far-fetched dream. The above inferences are substantiated by extensive surveys [1-3] which point out the fact that while companies understand the significance of testing and consider the same to be an integral part of the development cycle, the extent of testing is severely limited to unit tests, followed by integration tests and minimal testing in the CD pipeline. Moreover, as pointed out in the Gitlab DevSecOps Survey 2021, testing remains as the area most likely to cause delays for the third year in a row (2019, 2020, and 2021 surveys). “Testing delays everything”, “Testing is not yet fully automated in the deployment cycle”, “Testing can be slow in both writing and running” are some of the extracts from the Gitlab DevSecOps Survey 2021. The challenges also present vast opportunities if relevant tools are built. The domain of continuous testing aims to address the challenges in the above steps. 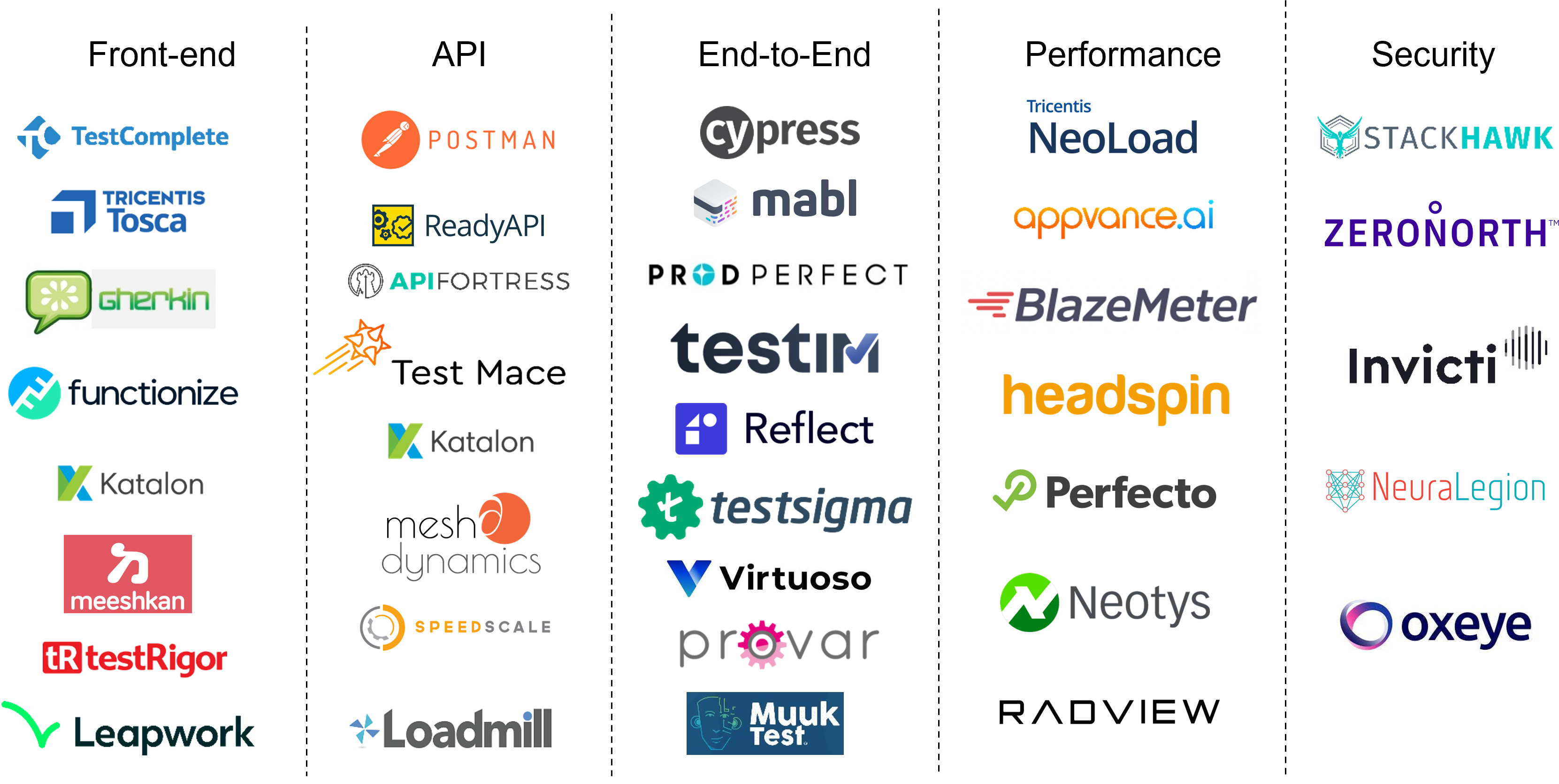 Testing in the CD pipeline is primarily done on five fronts – Front-end, API, End-to-End, Performance and Security. The figure illustrates the tools available in the market with each of them adopting different approaches to prepare test cases. The current state of testing is as follows:

The above scenario clearly results in inefficient and time-consuming testing phases, and we can observe trends in terms of upcoming tools solving for the presented challenges as follows:

Managing Dependencies and Statefulness of Databases:

A bottleneck which has been hindering the adoption of extensive (close to real-world) testing in the CD pipeline is the management of the Database ‘state’ and the script dependencies. For the test results to give a certain outcome, the state of the data stored on the database servers need to be appropriate. Use of production databases for this purpose is unfeasible as a single bug might corrupt the entire database and bring the application down.

A few upcoming trends attempting to address the above issues are:

The cost of delayed identification of bugs increases exponentially with the growth of the application. Therefore, it’s only obvious that extensive testing is performed as early as possible in the life cycle of the code. However, the provisioning, configuration, and maintenance of testing infrastructure (servers and databases) is a time-consuming process resulting in companies ignoring these tasks as much as possible.

A few trends addressing the above issues are:

Tools to transform a local computer into a server as a part of the application infrastructure network to deploy the developer’s code and run testing scripts. An alternate is also to mock the dependencies locally and test the code.

While there are plenty of tools for test automation, the analysis and insights drawn from test outcomes is manual (which test failed, where might the bug exist, etc.). Additionally, the market penetration of test management software is low [3] because staging tests are only performed at certain intervals and the management of the reports produced can be taken care of by the QA teams. In other words, continuous testing hasn’t become the norm… yet.

However, as progress happens across the different buckets discussed above, the need for a horizontal tool to overlook the created test cases, configured infrastructure (databases and servers), tests run, bugs identified, suggest improvements in test cases, provide role-based control to developers/testers, etc., and present the test state to the relevant stakeholders is going to arise. An inherent requirement for any tool being built along the above lines in the domain of continuous testing is to provide integrations with the versioning platforms, CI/CD pipeline tools, cloud servers and storage, and any other complimentary tools.

A future where a single code commit or even a small update in one of the microservices is autonomously reflected on the live application (having undergone a thorough diligence) is going to reduce the development cycle time significantly. And the developments in the testing domain along the lines discussed above is going to be a large step towards achieving that vision. In conclusion, the power of continuous delivery can only be unlocked through the adoption of continuous testing.

If you are a founder building in the DevOps/SaaS space, we would love to hear from you. Please feel free to reach out to Kanishk to brainstorm, discuss developments or opinions at kanishk@pravegavc.com